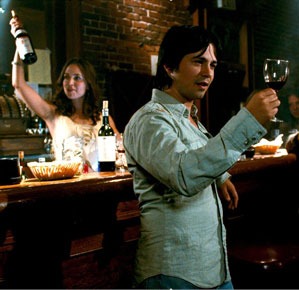 Bottle Shock, a movie about the famous “Judgment of Paris” in 1976 when two ’73 California wines were judged superior to several esteemed French wines, is now out on DVD and in the rental stores. Go rent it!

The big deal? The judging was done in France, it was “blind” (the bottles were covered up and the judges did not know what was in their tasting glasses) and only one of the eleven judges was an American. Another was British, and the rest were the cream of the crop of the French wine and culinary worlds. And only the French scores were counted! While it’s not very accurate historically, it’s still a lot of fun. It didn’t do so well in the theaters like many “art” movies, but is certainly great for a Friday night, with your significant other and of course a bottle or two of your favorite wine.

To do justice, of course, you should have a bottle of both red and white at hand, toss around a little a French at the right moments (“merde!” and “mon dieu!”) and do lots of ostentatious swirling before you taste.

But do remember, before you gloat too much, that the French still make some of the world’s best wine.