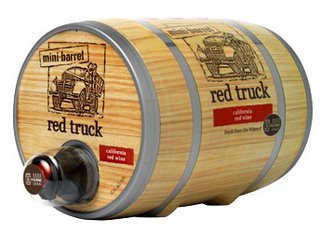 If you’re having, oh, 10 people over for a glass of red wine but don’t plan to break out the Chateau Angelus, you might want to look into a mini-barrel from Sonoma’s Red Truck winery. This thing holds 3 liters, the equivalent of four bottles, and it’s designed – obviously – to look like a wine barrel, complete with “rings”, an “oak” finish and “burned in” image and name. They’re only offering it for sale right now at Sam’s Club, but later in the year I understand they’ll offer it much more widely.

I haven’t tasted (yet) this rather unusual mix of Syrah, Petit Sirah,Cabernet Franc, Mourvedre and Grenache. Curiously, though, the news release and all the subsequent wine industry coverage that I saw really focused on the packaging – innovative, relatively low carbon footprint, superior preservation for up to 40 days, and an inclined inner liner that requires no tipping to get the last drop of wine. As for what’s inside? The winemaker’s notes say “Medium-bodied and complex, flavors of chocolate, berries, cherries and licorice abound. The black pepper finish settles with smooth tannins.” Not sure about the settling part, but as I said, I’ll try it out and give you my impressions for what they’re worth. But as I’ve always said, your impressions are really what count.

For sure, Red Truck wants on the eco-friendly, “green winery” bandwagon in a big way, and there’s nothing wrong with that. Nor is there anything wrong with alternative packaging, especially when it makes a positive difference in the environment without compromising the taste or preservation of the wine. But it won’t fit nicely on the shelf, I don’t think, next to standard 750 cl bottles, and in the minds of some, it’s still gonna be a “box” wine, which is why I say taste first.

I do think you’ll see more and more good wine – perhaps not super-premium or luxury wine, for awhile – go into alternative packaging like this. But I don’t think you’ll be “barrel aging” the Red Truck.

House Resolution 5034, introduced by the National Beer Wholesalers Association (NBWA), is supposed to be…

Wine Clubs Whiz Out of the Woodwork

I don't know about you, but a quick scroll down my Facebook page a moment…

Have you recently visited an out-of-state winery and wanted a case sent home, only to…