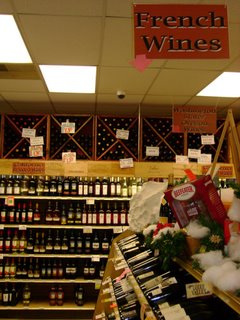 Your first step is to figure out how much you want to spend. So take a few minutes to consider how much wine you want and what you’ll use it for (yes, to drink, but…).

For example, you may want to stock up for a holiday party, or you’d like some bottles to make up some wine gift baskets. Or perhaps you just want the convenience of having a case or three in the basement so you don’t have to go back to the store every few days. Or maybe you’re having a dinner party for eight and want to pair some wines with the courses you’ll serve, a great idea!

The biggest challenge to the novice wine buyer is finding a wine retailer who:

1) Actually knows something about wine

2) Is more interested in helping you learn and expand your range of tastes than in selling you what he overstocked and needs to push out the door, and

If you’re having a party, you may want a few bottles of several varietals, but it’s a good idea to buy in quantity anytime you shop, for a very simple reason: savings. Most wine retailers will give you 10% off a case (12 bottles), either a mixed case of any type or vintage, or a dozen of the same thing – for example, Robert Mondavi Cabernet Sauvignon Reserve 2005. Some retailers may even give you 15% off, though this is typically for a case of the same wine only. 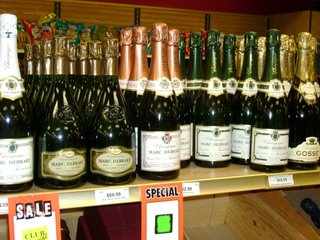 A lot of wine retailers also have “clubs” that feature extensive discounts on wines they want to promote. Now, they generally won’t give further discounts on their club selection wines, but will give you the 10% off all the other bottles as long as you’re still buying a full case. At left you see Marc Hebrart Champagnes featured as wine club items at Township Wines and Liquors in Piscataway, NJ.

If you get to the checkout and the clerk isn’t automatically offering that discount, ask him or her to hold off ringing you up and ask for the owner or manager. Seriously, I recommend against spending your money with any retailer that won’t give you at least a 10% break on a mixed case of 12 and 15% on a solid case. Most will, and those that won’t, don’t deserve your business.

Cruising around the Store

Many wine stores separate their American, Australian and Chilean wines by varietal, so for example you’ll find all the Merlots in one place, Cabernets in another, and Chardonnays in a third, etc. Sometimes they’re also organized by price. Here, you can decide what to buy based on how much you want to spend on each kind of wine, and you’ll be able to do pure comparison shopping, since the varietals will be more or less lined up next to one another.

But most wine stores will also typically display most of their other wines – from France, Germany, Spain, etc. – by country. That means you’ll be looking at a lot of unfamiliar place names rather than the names of the grapes. That’s where a good wine retailer can start helping you. But even if you know that great Chardonnay comes from “Chassagne Montrachet” you may not know what that really means, or what to buy from that village, or at what price. That, again, is where a knowledgeable retailer – and a little prep work on your part – come in. Of course, you can also download my Wine-Flair Wine Grape Charts and take them with you. 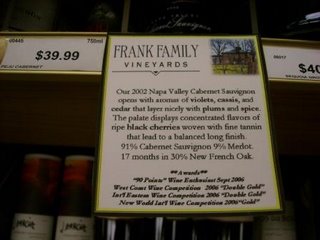 Shelf talkers are little cardboard tags placed at the bins where wine is stored in retail shops. They typically include a description of the wine’s flavors, aromas and sometimes even the kind of food it complements. And speaking of compliments, shelf talkers are written by the wine producers themselves, often beginning with “our” or “we.” They’re likely to be a bit, well, skewed in a positive direction, especially if they’re written in the flowery, sometimes hilariously-over-the-top prose that wine marketers tend to employ.

On the other hand, if the wine received a very good or exceptional rating from one of several recognized wine writers or publications such as Wine Spectator or The Wine Enthusiast, the retailer will often use those tags, which you can generally view as a bit more of an independent appraisal than a shelf talker. Here’s an example of a promotional tag for 2001 Truchard Napa Cabernet, with a rating of 89 and the initials JL for James Laube, a senior editor at Wine Spectator and a well-known wine pundit. 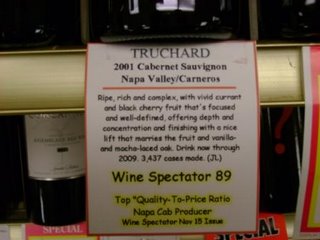 In both cases, these tags can be useful in helping you select a bottle, especially if you’ve narrowed your choice to a specific varietal, vintage or both – in other words, you know you want a bottle of, say, California Syrah not which one. Shelf talkers can help you make an informed choice and get the best value for your money.

Many wine publications, and organizations such as the American Wine Society, offer vintage guides each year. These give you a very (50,000 feet, as they say in business) high-level summary of the quality of wines produced in specific regions in a given year, based principally on weather conditions and other known factors such as insect infestations, outbreaks of vine diseases, drought and other things.

For example, I’m looking at a vintage chart covering 1990 through 2003, produced interestingly enough by the Pennsylvania Liquor Control Board.
It rates major wines such as Bordeaux White, Bordeaux Red, Central Italy, California and Washington Cabs, Oregon Pinot Noir and several more, across all those years. The chart offers a numerical rating from 60 to 100, and additional notes such as Drink, Hold, and No Vintage Declared. Obviously such simple charts can’t tell you the full story and I wouldn’t use them as your sole guide, but they are useful in getting your bearings, in avoiding abysmally bad years, and in determining what wines are good value. But they’re not Bible by any means.

There are literally dozens of wine guides, and among the best in my view are the annual series from Food & Wine magazine. About 12 to 15 bucks, and sold in a lot of wine stores as well as bookstores, it will give you a up-to-date listing of the wines being released for sale each year. So, for example, the 2009 guide will have listings mostly for 2007 wines. Hugh Johnson’s annual pocket wine guides, published in the fall, are similar and also very handy for the novice wine buyer who needs to know just enough before stepping into a wine store. 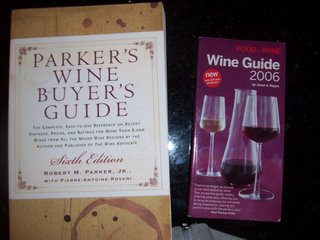 Many other, larger guides are really a collection of wine ratings by the author or authors, and often contain re-hashes of previous ratings, with a few new wines from more recent vintages tossed in. I have the sixth edition of Parker’s Wine Buyers Guide, most recently copyrighted in 2002 but with copyrights back to 1995. The most recent vintage it covers is 2000, with ratings and appraisals of wines going back to 1995 and occasionally, earlier. Including the index it runs 1634 pages, and has a great amount of detailed information – vineyards, winemaking practices and the history of great (and not-so-great) wine estates. This book is for pretty serious collectors, and you’ll rarely find the wines listed in your average retail store, if for no other reason that those vintages have generally been consumed long ago or snapped up by collectors. But if you’re serious about the sport, have a go.