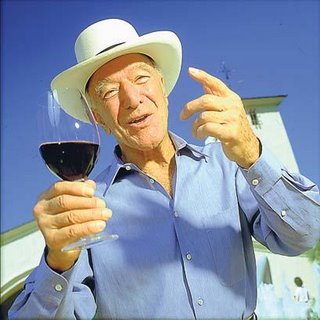 (Robert Mondavi died just about one year ago.)

It should have been wonderful: a trip to Washington and a state dinner with Jack and Jackie Kennedy!…all while flying the flag for the family’s Charles Krug Winery.

Robert Mondavi had been representing the winery for some time as general manager and head of sales and marketing. As part of his business education, he and his wife Marjorie had traveled to France in 1963 and brought back some new ideas. Not just about making wine, mind you – for example, using oak barrels for aging – but also about the appeal of a more European lifestyle, including fine food and, well, “high culture” at a time when Americans were eating Swanson dinners off trays and washing them down with colas. Bob, as he “modestly” liked to be called, now began to insist on plowing Krug’s profits back into the obsolete winery.

Krug would forever throw off the making of cheap ‘plonk’ and become a world-class winery in its own right. Bob was, back then, what we would later call a ‘visionary’ in the Internet age. Bob’s brother Peter Mondavi had different ideas. As the winemaker, he felt that every “suggestion” his brother made – about wine styles, fermenting techniques, the need for aggressive promotion and marketing, and even sharing ideas with competitors – was an implied, if not explicit criticism, of him. And Peter and his wife, along with his two sisters and their families, also felt strongly that more of Krug’s profits belonged in their pockets.

Still, Marjorie couldn’t stand in the presence of the President of the United States and his ultra-glamorous wife in a house frock, especially when the president of Italy was being honored, could she? She needed a mink, of course. And since this was really a business trip – the Mondavis were representing Charles Krug, after all – shouldn’t the winery cover the cost until Bob could pay it back? As it happened, the trip didn’t take place until early 1964, for a state dinner under a decidedly less elegant president named Johnson.

Peter’s anger and resentment simmered for another year as Bob’s spending and his sometimes high-handed running of the business continued. One afternoon, the brothers began to argue again about Bob’s purchase of the mink for Marjorie. Words turned to fists, Peter found himself on the ground, and a few months later Robert found himself out of a job – fired by his mother Rosa, alienated from his family, and suddenly removed from the only life he knew.

That day, the Robert Mondavi Winery was born. 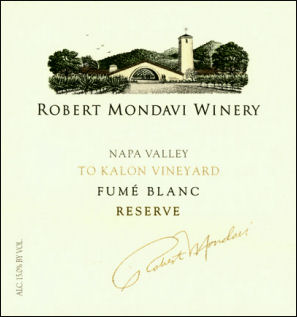 On Friday, May 16, “Bob” left us. But in the intervening 43 years, he set California winemaking, and wineries in Napa especially, on a course to become much better than they ever would have otherwise. Some say that in pursuing his vision he tore his own family apart in almost exactly the same way he and his brother had parted. And though he and Peter would reconcile in his final years, the inland empire Robert built, with an iconic mission-style winery as its emblem, fell to a corporate wine giant in 2004.

Robert Mondavi was both a simple man and a titan, and full of contradictions. Generous to a fault, his quest for perfection became an obsession that sometimes clouded his judgment and complicated his family life and his business in ways we can only imagine.

Yet he did far more than put his own personal stamp on the outstanding wines that bear his name. His legacy is a steadfast encouragement and personal support of two generations of winemakers, who collectively elevated American wine and the California wine scene to the world-class status for which he yearned.

In this case, “Mission Accomplished” is actually an understatement.