Movies about wine are relatively few, and good ones are as rare as a 1961 Hermitage La Chapelle. Here’s an overview of a couple worth seeing, and some educational ones, too. 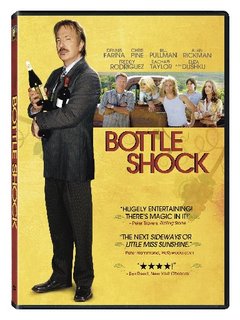 Bottle Shock, which was independently released in the United States in August of ’08, is available on video. The movie is supposed to tell at least part of the story of “The Judgment of Paris,” that game-changing event in 1976 when a Chardonnay from Napa’s Chateau Montelena and a Cabernet Sauvignon from Stag’s Leap Wine Cellars beat some of the top French wines.

In a blind taste test. In Paris. With some of France’s top wine experts as judges.

Problem is, lots of stuff shown in the movie just isn’t true. Steven Spurrier’s wine shop, the Academy du Vin, wasn’t struggling at all but was a fairly successful business, teaching classes and catering to English and American expatriates living in France. There are a lot of made up characters, too – you know those composite people that Hollywood loves to invent when the real ones aren’t compelling enough. And let’s not forget the gratuitous beauties that pop up: Eliza Dushku as a local tavern owner and Rachel Taylor as a cellar rat/intern and love interest. There’s a lot of unnecessary drama that detracts from the real story – a classic underdog tale and one that is ultimately satisfying, even if we know all along who’s going to win.

And there’s one huge hole in the movie: Warren Winniarski, the proprietor of Stag’s Leap Wine Cellars, is entirely left out along with his award-winning Cabernet. So is his winemaker at the time, Mike Grgich, one of the first employees of the Robert Mondavi winery and today the proprietor of his own, famous, and award-winning winery.

Oh, rent the movie anyway. The scenery is gorgeous, the American wines actually did win, the French were really pissed off, and this single event helped launch the modern and very successful American wine business.

You probably know by now that the biggest wine movie in memory – actually a thinly disguised buddy movie – is 2005’s Sideways. To be sure, there were a few glaring errors in the movie with respect to wine; for example, in a fit of panicked snobbery, Miles stands outside a restaurant and declares that he won’t under any circumstances drink any fu**ing Merlot, and if anyone orders any, well, he’ll leave. And at one winery he whines that he’s not a fan of Cabernet Franc even when it’s made well. Yet later in the movie he raves about one of his prized possessions, a Chateau Cheval Blanc, made with…Cab Franc and Merlot, of course.

Aside from the fact that Sideways is a much better movie in general than Bottle Shock, it’s a much better wine movie, too. You’ve probably seen it, but if you haven’t, go to your nearest Red Box and rent the movie. And without giving anything away, all I can tell you is to look forward to the brief soliloquy of Virginia Madsen’s character, Maya, as she describes in delicate, heartfelt, and almost heartbreaking terms the creation and evolution of a single bottle of wine and all the lives it touches along the way.

Another movie, both fascinating and educational, is 2006’s Mondovino, a documentary that tries pretty hard, maybe too hard, to pull back the curtain and expose the ugly underbelly of the global wine business. Its point isn’t too hard to figure out: a handful of huge wine and spirit conglomerates is slowly but surely taking control of large and small wineries round the world. They’re homogenizing winemaking so that we’ll all be drinking the same thing one way or another in just a few years. And we’ll like it, because that’s what we’re being told to like.

A few of the world’s wind notables emerge as clear villains here, among them wine critic Robert Parker. And more particularly, Michel Rolland, “the flying Frenchman” who consults to about 100 wineries worldwide including many in France, the United States and South America. It’s interesting that Rolland denies that he tells his clients to “micro-oxygenate” their wines, but about 12 minutes into the movie he is seen and heard doing precisely that. Director Jonathan Nossiter, an established filmmaker and sommelier, seems to include Robert Mondavi in his gang of bad guys, ironically based on Mondavi’s attempted joint venture in Italy which failed, and his prominence as the leading spokesman for the powerful American wine industry until his death.

The movie rambles a bit, a lot actually, and at 165 minutes it’s way too long and lacks, well, editing. The camerawork is really crap, too – I could do better on rollerblades with a camcorder after a magnum of Champagne. And if you think Parker is the man and Rolland is, uh, the other man, then you won’t like what you see and hear.

But if you’re concerned about the direction that the wine world may be taking, slip this in your DVD player and spend a couple hours seeing how sausage, er, wine is made. Curiously, I couldn’t find a trailer for this movie anywhere on the Internet except in French, not even on the filmmaker’s own website where it says “coming soon.”

Jancis Robinson’s wine course is a pretty worthwhile investment in time – about five hours – and money, under 20 bucks.

The two-disc set walks you through winemaking techniques and wines made from the so-called “great grapes” including Chardonnay, Cabernet Sauvignon, Sauvignon Blanc, Shiraz, Riesling, and Pinot Noir. Best of all, Jancis takes you to countries where these wines are made, giving you gorgeous views of the vineyards and interesting chats with owners and winemakers. It’s interesting that Jancis is able to translate wine concepts and terms in ordinary language, and yet you see how she’s a bit arrogant and condescending when she’s talking to the people who actually make the wine.

In any event, though, I don’t think you can find a better introductory video wine course at any price. Naturally it’s available from Amazon.com but you can also find it in the larger bookstores and video outlets that stock cultural and educational videos.

The Secrets of Wine

This course, on the other hand, is a single disc with a scant 60 minute running time. I won’t tell you that you can’t learn anything from this course, but unless you know absolutely nothing about wine, you won’t learn very much. I’d skip it. By the way, any book or video that promises to reveal “secrets” probably isn’t worth your time or money – after all, if they’re really secrets they won’t be on video, will they?

This 2005 video on a single disc is actually pretty interesting although the production values are lousy and, like Mondovino, it could use some editing and polish. It was produced by a guy named Eric Gerardi from Dayton, Ohio, which piqued my interest since that’s my old stomping ground and there aren’t a whole lot of wine-savvy people in southwestern Ohio.

Gerardi visits and interviewers winemakers from Benzinger Family Vineyards, Steltzner Vineyards and Markham, and speaks with chef and author Cindy Pawlcyn, the owner of Mustard’s Grill in Napa where I’ve eaten a dozen times. Despite the amateurish quality, in about an hour and 15 minutes you get a nice picture of winemaking in Napa and Sonoma – along with a healthy dose of self-promotion by the winemakers.

I don’t think this video sold too well, and as a result it’s a bit hard to find, but it’s certainly worth about the 15 bucks it will cost you.

Get Ready For Passover

With Passover now a WEEK away, it's time to think about GOOD Kosher wine. Let's…