I am a small-town Ohio native and a former Marine who once thought that Michelob was the ne plus ultra of beverages. As I traveled around the world in the Corps, and later as a student and a member of the diplomatic service, I found precious little American beer available. But wine was available, often mostly French, and sadly, very little American. So, that’s what I drank.

And as I did, I often remembered “liberating” and tasting half-bottles of something called Chateau Margaux with my oldest pal Bill Dankworth. We first pulled them from straw-filled boxes secreted in a closet in our basement at 721 Broadway. It seems that my father had been approached by a little old man at his law office. This man must have been an extraordinary salesman, for he sold dad several cases of this stuff, although I never remember my parents drinking it…yet it disappeared. And thus began my first taste of, and interest in, wine. 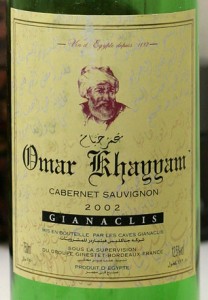 I’ve learned some tricks, too. For example, stuck in the Sinai Peninsula “village” of Sharm el Sheik, my friend Hisham Kamal and I had exhausted our supply of warm Stella beer, and were down to one bottle of a harsh Egyptian red wine called Omar Khayyam. With no tool whatsoever to open it – we were camping and scuba diving – Hisham wrapped the bottle in a towel, and methodically banged it gently against a post. The sloshing of the wine inside slowly pushed out the cork. On a hot summer night it was a life-saver; however, I do not recommend this.

Years later I moved to San Francisco, and began spending one weekend a month in wine country, visiting tasting rooms, walking the vineyards, meeting winemakers, taking classes and…visiting tasting rooms. And since the dot-bomb exploded in 2001, taking my job with it, I have lived in New Jersey…and spent a lot of time and airfare traveling back to Napa and Sonoma, taking courses at the Rudd Wine School of the Culinary Institute and wishing I was back in wine country.

Click here to email with a question or comment about this site, about wine in general, or about how annoying your in-laws are.