There are a lot of websites that show you the basics of understanding wine labels, with arrows pointing to this piece of information and that. I won’t duplicate their efforts, and instead I’ll try to tell you about some of what’s behind it.

So I’ll start by asking: When you look at a wine label, does the thought of permanently switching back to beer cross your mind? I understand. But you can gain a lot from learning just a little about the “language of labels”.

Where in the World?

There’s a lot on a wine label, especially those on bottles from France, Germany, Italy, Portugal and Spain, where wine is labeled by the region where the grapes are grown, not by the grape varieties themselves. That’s a departure for Americans, who are more comfortable knowing they’re about to drink a “Cab” or a “Chard.” Alas, it’s not that simple.

What’s in a Name?

Across the major European wine producing countries except Germany, wines are generally classified in a system that translates roughly into their respective languages as “Controlled Place Name of Origin” – in French, it’s Appellation.

Although varying a bit country to country, the rules governing the “control” part even determine which grapes can go into the wine; how many gallons (hectoliters, actually) can be harvested from each hectare of land, what are acceptable practices for growing grapes and making wine, and the minimum percentage of alcohol the wine’s got to have. The label doesn’t tell you what those things are, but it is telling you – if you listen – that the wine’s been produced under a set of standards.

If you just want to know whether a particular wine is good stuff, here you have to be careful because “quality wine” is actually a designation across the European Union (EU) and it has a specific meaning under EU trade laws. So the AOC system as reflected on the label you see it is no guarantee that the wine in a given bottle is any good or that you’ll like it, just that it confirms to a bunch of regulations, many of which are decades or more old. And the Germans have a classification called, naturally, “Qualitatswein.”

What’s on your Table? 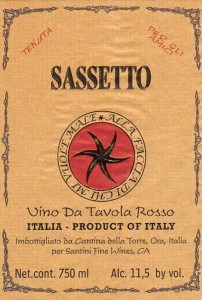 First, let’s get some basics down. “Table wine” doesn’t mean poor or cheap wine, but it has at least two meanings. Broadly, it just means wine that isn’t sparkling such as Champagne, or has not been fortified with spirits. Port, for example, is a fortified wine because grape spirits are added to it before bottling. Table wine also refers to wine that you drink, well, at the table, typically with food. This also distinguishes it from aperitifs such as Sherry, and digestives (“digestif”) such as Cognac, Armagnac or Brand.

Of course, because nothing can be easy, there’s another legal-istic meaning of “table wine” in the EU, wine that for some reason doesn’t meet the standards as a classified wine. These wines in France are called Vin de Table, in Germany Tafelwine, in Italy Vino de Tavola, and in Spain Vino deal Tierra. And most of these countries have another similar designation that roughly means “wine of the land,” such as the French Vin de Pays. Got it? Well, there’s a lot more, but don’t worry about memorizing this stuff; just get a feel for it.

There’s often a typical mix of grape varieties in each European wine, and we refer to this collectively as “typicity.” For example, the Bordeaux Cotes de Francs AOC wine can have any of four of the five classic Bordeaux varieties in it – Merlot, Cabernet Sauvignon, Cabernet Franc and Malbec. But few producers put any of the fifth or sixth permitted grapes, Petite Verdot and Carmenere, into this wine, and the percentages of the other four can vary widely. And even when a single grape only is used, such as in Vouvray where the dominant grape is Chenin Blanc, the wines can range from dry to syrupy-sweet and thick like a Sauternes or Barsac.

So even knowing the grapes that go into the wine doesn’t tell you much, if anything about the style of the wine unless you know more about the region and individual producers. This, of course, is the reason you must drink a different wine every day. Religiously. And take notes!

The main thing to remember about the various European “appellation” systems as shown on the label is that they generally pertain to a region, a town, or a smaller subdivision of a town. Of course, the French aren’t content to let the Germans be the only country to complicate things, so in Burgundy what’s important – and what’s listed on the bottle in addition to the place name – is the name of the vineyard rather than just the chateau (winery).

Soil in a Bottle

The AOC system honors the notion that each wine is a reflection of a specific piece of land, and as a result has certain unique characteristics based upon soil, weather, the way the vines are cultivated, the type of grapes grown, winemaking styles, and more. Some winemakers and observers set their clocks by this, and they believe in terroir with an absoluteness that makes religious fervor seem like promiscuity. Others are more likely to say it’s hooey and not can’t be proved, only that it’s a useful wine marketing tool that adds mystique to certain wines and wine regions. Another group is somewhere in the middle.

I say you can’t dismiss this out of hand. The French certainly put stock in it, literally, given that wine made from grapes of a given vineyard can fetch 10 or 20 times that of wine made from grapes grown 150 feet away. Really. This is especially true in Burgundy where even a small vineyard may be subdivided many times over as well as have a dozen different owners producing tiny lots of wine from the harvest. But the concept is probably overdone when a wine writer says you can taste limestone in wines whose grapes were grown in chalky soils. Who has tasted limestone, anyway?

This is probably the biggest area of contention, the idea that the soil actually imparts its specific constituents to the wine, and that you can taste – and recognize those tastes – in the wine. Now I don’t know about you, but I’ve never eaten chalk, and while I’ve got granite countertops in my kitchen, I’ve never snacked on them, only snacked off them. But I think there’s too much evidence, anecdotal and personal, perhaps, to dismiss the idea that individual vineyards express the “personality of place” in the wine that comes from them. So if you’re interested, read up, starting with this New York Times article, and decide for yourself.

Back to the Germans and their absurdly complicated classification and labeling system. In the highest quality group called QmP (“Qualitatswein mit Pradikat”), the wine is classified based primarily on the ripeness of the grapes when picked…which means it can change from year to year. Within each QmP classification there’s a corresponding level of ripeness, starting with Kabinett, and proceeding up the sweetness chain from Spatlese (late harvest) to AusleseBeerenauslese (selected grapes), Eiswein (ice-wine) and finally the very rare Trockenbeerenauselese, which translates roughly as “of course you cannot pronounce this”. Now Eiswein refers really to the condition of the grapes – frozen – when they’re harvested rather than their ripeness, and ironically, you can have a German wine that’s “Trocken” (dry) yet made from Spatlese grapes, for example. (selective harvest),

German wines that don’t meet the QmP standard may be designated QbA (Qualitatswein bestimmter Anbaugebiet), and here the winemakers can add sugar before the grapes are fermented. The Germans also have their own version of “wine of the land” called, appropriately enough, “Landwein,” and wines classified as table wine or Tafelwine. However, most Germans would rather eat the table than drink that stuff.

And it doesn’t end there. All German wines carry an “A.P. number” which can give you a lot of information if you’re so inclined to parse the number and do the research. Frankly, I’m not. The AP number is like an Internet IP address, but with five sets of numbers rather than four, separated by spaces rather than dots. The first number indicates the region, the second the village or town, the third number is the estate, the fourth is the barrel or bottling, and the last number is the year that the wine was tasted before bottling. Of course, you have to know what all these numbers mean, or else it’s like E.T. looking at a can of beer.

As you probably know, American wines are labeled by the grape variety but labels also include the year the grapes were harvested, the percentage of alcohol, the vineyard if it’s named, and the applicable American Viticultural Area (AVA) name. There may also be a “sub-appellation” just as in Europe. For example, a Napa Valley wine could also have the Oak Knoll designation, Oak Knoll being an area north of Napa City and south of Yountville and home to several wineries including Trefethen and Corley Family Napa Valley.

The AVA system is similar to the AOC system but doesn’t try to mimic it, and there are many other differences. For example, if the wine is labeled with an AVA, then 85% of the grapes must come from that AVA, and the same percent is required if a county is named. But that still means that a “Napa” wine could have 15% of its grapes grown in Alaska, Hawaii or elsewhere. And yes, I know of at least three wineries in Alaska and two in Hawaii.

A U.S. wine must have 75% of more of a particular grape to take that grape’s name as the name of the varietal. For example, a Cabernet Sauvignon must be at least 75% Cab, but the rest can be virtually anything. The exception is Oregon, where a varietal must have 90% or more of the named grape variety.

As Paul Harvey says, now you know the rest of the story. OK, you know maybe a little bit of it.