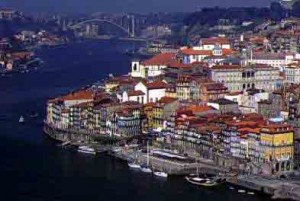 Some Port producers still crush and ferment in the very old-fashioned way: people stomping barefoot on grapes in lagares, rectangular troughs made of stone, concrete or wood. Taylor Fladgate, for example, and Warre’s, both among the world’s best (Warre’s claims to be the first, established in 1670) still make some of their best Ports this way. But it a dying art, to be sure for a lot of reasons – economics, efficiency, and according to Warre’s, there just aren’t enough people around who are available and willing.

Anyway, Ports at this stage are traditionally placed in pipes, which are just casks that hold 550 liters or about 145 gallons. They”re then transported to storage and blending warehouses at a place called Vila Nova de Gaia, where the producers do the final blending and classifying, resulting in wines of about 20% alcohol. Not all, but many still do this. 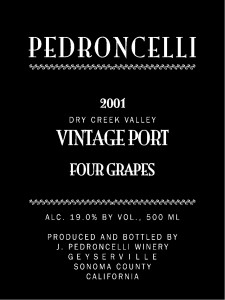 Of course, port-style wine producers outside Portugal do things differently. Few use traditional Port grapes, many preferring instead to traditional noble grapes such as Zinfandel, Petit Verdot, Cabernet Sauvignon and Cab Franc. One winery I know, Virginia’s Veritas Vineyard, uses Tannat grapes native to France’s Madiran region, which are remarkably tannic and produce a dense, chewy wine that sometimes must bottle age for a decade before it’s even drinkable.

Others use hardy local varieties such as Chambourcin, Norton and Frontenac, that are rarely used by themselves as varietals. Others do grow traditional Port grapes, such as Sonoma’s Pedroncelli.

Vintage
Only about two percent of Port can be called Vintage. It’s aged in barrels for a couple years only but then in bottle for maybe 10 years before being released for sale. Aging in bottle retains the ruby color and fresh, fruity quality but the long bottle-aging adds character…and price.