I walked onto a mediocre liquor store in New Brunswick, New Jersey the other day. Staring me in the face was a rather poorly-configured display of Cupcake “LightHearted” wines which, according to Travel + Leisure Magazine, “locks in at less than 80 calories…eight percent alcohol by volume, and less than one gram of sugar…It’s also gluten-free and vegan.”

I was intrigued. And it was a “ghastly” nine bucks. So let’s look at low-alcohol, low-calorie versus “traditional” wine.

Well, I bought a bottle of the Cupcake (I wine I’ve never written about and about which I’m not terribly fond, in full disclosure) 2019 Rosé, took it home, and pitted it against a $14-$16 Ferrari-Carano 2019 Rosé…I label I know, and a winery I’ve visited, and like.

Well, at 13.8% alcohol, the Ferrari-Carrano, made from Sangiovese, was 72% higher in alcohol, but I couldn’t find either a calorie or residual sugar number…anywhere online, including the listing of the winery’s website itself. One absurd retailer, Passion Vines in nearby New Jersey, listed the varietal of this wine as “Rosé.”

Cupcake, by the same token, listed the residual sugar and calories, but not the variety(ies) in the wine, and instead blathered meaningless marketing nonsense: “…refreshing fruit-forward flavors that entice the senses.” Well, good. Because if the wine bored my senses, I wouldn’t want to taste it.

In both cases, this is some of the absurdity and opaqueness of wine marketing: little information, silly and laughably-clownish promotional descriptions, and in some cases a desire to just not tell the consumer what she or he is getting. Folks, the NSA doesn’t care about wine. Agreed, most consumers don’t care, either (sadly), but the idea that you can’t find out how many calories are in one wine or the grapes in another is nonsense. And pisses me off.

Both were ok. As you might imagine, the Ferrari-Carano packed more punch and given that alcohol is, in wine, a flavor-delivery system, has more flavor, body, and aroma. Still, the Cupcake was palatable, if very light and ephemeral, and two full (adult) pours did not register at all in terms of alcohol content and the feeling one generally gets from “full-strength” wine. It was more like strawberry water. Which, well, ain’t bad I guess. But what’s in it? 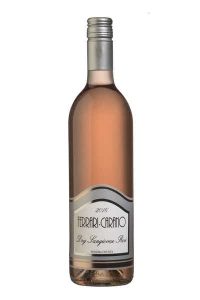 Lately, I’ve passed on most Rosés, and when I do, I go for either a classic gentle French Provence issue, or alternatively a much more dark, rich and ballsy Marqués de Cáceres Rosado from Spain. But while I much prefer the Ferrari, for those who are easily made horizontal, especially in the hot weather for which these wines are designed, just go for the Cupcake.

Now, I’m going to turn the A/C down to 60 and pour myself a glass of St. Emilion Bordeaux.

I’d been to Alba Vineyard & Winery years ago, and walked away unimpressed.  There was…