I have to say it: France, and specifically Bourgogne, what we in the great USA call Burgundy, is where the world’s bestPinot Noirs and Chardonnays are grown. And I say “grown” because Burgundy is all about the vineyard rather than the chateau or winery.

Not to say that there aren’t some excellent and least interesting Pinots and Chardonnays from other places – old world and new, oaked and unoaked, cool climate and hot climate, austere and crisp, or sweet, caramel-y, and in my view pretty much undrinkable—think Yellowtail. Or, actually, don’t. But seriously, I’ve tasted Pinots from New Zealand and Oregon that rival the best from Burgundy, and just this week I had a Chardonnay from Italy that I might have sworn was a Premier Cru from France.

But the fact remains that for a whole bunch of reasons, Pinot Noir and Chardonnay flourish better in Burgundy than anywhere else on earth and you’d be hard-pressed to challenge that. Incidentally, several other grapes are at home in Burgundy including Pinot Blanc, Pinot Gris, Aligote—a totally under-appreciated white grape that has some similarities to Chardonnay—and last but not least, Gamay, the great grape of Beaujolais.

Now you could spend a lifetime learning about all the vineyards in Burgundy. You could memorize all 33 Grands Crus and win a wine-trivia contest, and you could read the 821 pages of Clive Coates’s The Wines of Burgundy and learn far more than you wanted to know about this magnificent, almost perfect wine-growing place. I’m about a third of the way through it and frankly it’s more like a career than a book.

What you might find more interesting if you care about any of this, beyond just how good these wines taste, is the idea of terroir.  This is the somewhat mystical concept in which the soil, subsoil, temperature, rainfall, elevation, drainage, sun exposure and hours of sunlight, density and orientation of the vines, wind, cover crop, and a bunch of other things determine what ends up in your glass, far more than anything the winemaker does. Nowhere in the wine world more than Burgundy is the idea of terroir held so absolutely, regardless of whether any of it can be proved.

For hundreds of years leading up to the French Revolution, the great vineyards of Burgundy were owned by the nobility and the Catholic Church, who leased them out through a chain of proprietors down to the tenant farmer who actually maintained the land and the vines, and grew the grapes. While the nobility is long gone and the Church has invested in other pursuits, this fragmented owner/operator system still exists.

In 1720, the merchant company Champy was founded…and is still in business today. And as the French Revolution unfolded a scant 60 years later, vineyards owned and operated by the Catholic church were confiscated and auctioned off, setting the stage for today’s Burgundy where even tiny vineyards often have multiple owners. In 1861, Beaune’s Agricultural Committee issued the first classification of Burgundy wines of the Côte d’Or.

In 1875, the nasty little louse Phylloxera visited its destruction on Burgundy, and in return, huge vineyard areas were eventually torn out and replanted. On the eve of WWII, Morey-Saint-Denis became the first Appellation d’Origine Controlee (AOC) in Bourgogne; on the eve of D-Day, the “Premier Cru” category was created in the region.  In 1975, Burgundy’s version of Champagne “Cremant de Bourgone” was granted AOC status, and just five years ago, Bourgogne Tonnerre became the region’s 100th appellation. 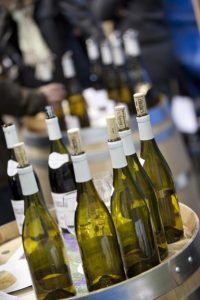 Burgundy is composed of five distinct regions, from north to south: Chablis, Cote d’Or (Cote de Beaune in the north  and Cotes de Nuits in the south), Cote Chalonnaise, Maconnais and Beaujolais. The Cote d’Or alone has 28 different wine-producing villages called communes, with a total of 20,000 acres or 8100 hectares of vineyards. The entire region has about 72,000 acres of vineyards, and produces about 200 million bottles of wine a year. That’s more than enough to fill up my cellar.

Anyway, the classifications in Burgundy do have a certain logic to them, but they’re still a pain in the ass, and they’re far different from the Bordeaux ones. The important thing here is the vineyard and village where the grapes are grown, rather than the Chateau as in Bordeaux.

Tier 3 are true Village wines, about 37% of all Burgundies, and the grapes for these wines are sourced from vineyards within a single village or commune…and that’s what they’ll say, the village name; for example, “Appellation Nuits-St. George Controlee.” The rub here is that the vineyards themselves have to be classified at the village level or better.

Bringing up the rear, but by no means bottom-feeders, are wines from the 23 Regional AOCs, making up about 52% of all Burgundies. Make no mistake, the wines from regional appellations can be superb and command pretty big prices. These will be labeled by the broad region alone, such as Appellation Bourgogne Controllee, or by a smaller sub-region such as Cote de Beaune.

Chardonnay is far too often grown in hot-climate areas all over the world, allowed to overripen, and then turned into high-alcohol, over-oaked, sweet caramel bombs. I know that people like these, including a lot of Americans, so who the hell am I to say they shouldn’t drink them…just because I won’t?

As an aside I want to give a shout-out to Chablis, and no I don’t mean the plonk California jug wine such as Gallo I drank in college, that was made from French Colombard grapes. Although it’s considered the northernmost part of the Burgundy region, Chablis is actually about 70 miles northwest of the top end of the Cote d’Or. Its chalky soil (similar to the soil of Champagne), relatively cool climate, and restrained style of winemaking produces wines that are often described as austere or flinty. What they are for sure is about the purest “expression” of Chardonnay.

The merits of Burgundian Pinot Noirs are probably discussed and debated among wine lovers more than any other grape, wine or wine region. People that love them don’t think anything else comes close, and they’ll give you the reasons: they’re elegant, perfumed, silky, subtle, nuanced, and glorious! Notoriously thin-skinned, Pinots are lighter in color and lower in perceptible tannin than almost any other red wines, and deliver up a lush bouquet of summer fruit: on my palate, red cherries, strawberries and raspberries. As they age they gain spiciness and complexity that they clearly lack in youth, and contrary to a lot of conventional wisdom Red Burgundies can age for a very long time, at least those from good terroirs in the best vintages.