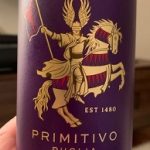 Conventional wisdom is that Primitivo was brought to California around 1968, and scientists at UC Davis declared it the same grape and wine we call Zinfandel in the US. But as far as I can tell–and there are at least a half-dozen versions of the “truth”–this “Italian” grape’s origins are actually from the Dalmatian coast of Croatia, the grape’s true name is Crljenak Kaštelanski, and it came to both the US and to California much earlier.

The UC Davis website says “Although the origin of the Zinfandel in California remains uncertain, the most plausible source seems to be the Austrian Imperial Nursery collection in Vienna, from where an amateur horticulturist named George Gibbs brought the grape to Long Island, New York, in the 1820’s. At that time, the Austrian Empire included the kingdom of Hungary, of which the territory now known as Croatia was a part. This source takes on particular significance given the discovery of ancient Zinfandel vines in Croatia in 2001.”

Nonetheless, this “original Italian version” Primitivo comes from the “Golden Knight” (Cavaliere D’Oro) winery in Puglia, dating back to the late 1400s.

A true value wine from an excellent vintage, it’s nicely acidic but lush with plum and blackberry flavors, and a nice long finish. I stuck mine in the fridge for 10 minutes to cool it just a little before tasting. Medium-bodied, it’s just bold enough without being overpowering, with just the right amount of tannin. It’s drinkable now.

For wine geeks, the grapes are cold-macerated before fermentation at 50 degrees for 1-2 days, then inoculated with cultured yeast. The juice is then fermented in steel and then aged eight months in barriques. For the rest of us, what you really need to know is that this is an about $10-12 max wine, and just magnificent for the price. Buy more than one if you find it!

When you think of Greece these days, you sadly might think of financial crises, bailouts,…