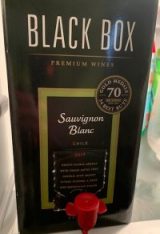 I don’t actually know the answer to that today. This Black Box Sauvignon Blanc Chile 2019 is the first boxed wine I’ve ever bought, though I have tasted a few from time to time at events and at private homes. It’s three-liters, the equivalent of four standard bottles, and at an average $20 it would appear to be of great value.

I took a small taste last night, but I want to taste it over time, to see if it changes in any way, and if the bag inside keeps the wine fresh and bright over time. The packaging boasts 70 Gold Medals, but doesn’t say which ones or when they were awarded, so as far as I know at least one could be from a Bradford (Ohio) Bodega.

Well, we shall see, and I shall let you know.  Happy Fourth of July!

JULY 5: Disappointment. This box and the 2019 vintage, at least, is very grassy and herbaceous. Too grassy and herbaceous. Worse, it doesn’t have the brisk acidity for which Sauv Blanc is noted and for which many of us drink it. In fairness, it’s not the worst SB I’ve ever had, but not terribly good, and not something I’ll repeat.  I will, however, in further fairness, try at least one more white and probably a Cabernet Sauvignon, and let you know. And the ease and convenience of use as a “house wine” is irrefutable.

Should You Listen to Wine Experts? Champagne Exports Highest in 5 Years Red Wines of…