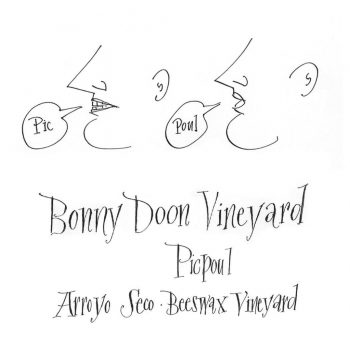 This wonderful white wine is the product of Randall (Randy) Graham, the quirky and unique founder of Bonny Doon, an enterprise that he created to produce American versions of the best Rhône wines. He’s run into some tough times in the last few years, a visionary winemaker but self-described not-so-good businessman, and in January sold the brand to WarRoom Ventures LLC after 35 years at the helm. Thankfully, he’ll remain as winemaker and on the board of WarRoom. Other labels he relinquished earlier include favorites Big House Red and Cardinal Zin.

Picpoul, or in the French way, “Piquepoul” (sometimes Piquepou de Pinet) means “lip stinger” on account of its bracing acidity. It’s typically grown in the south of France, but Graham brought it to California, and like so many of his other efforts, he’s done great things here.

Graham made his bones in 1984 using the Rhône varieties of Syrah, Grenache and Mourvedre to create “Le Cigare Volant” which became a cult, and almost commercial hit among American wines. The name is derived from a bizarre, typically-French law that prohibits UFO landings in the vineyards of Châteauneuf du Pape, the “King” of Rhône wines (the red version traditionally had up to 13 specific grape varieties in it; the white, up to nine). The wine’s popularity gave birth to what was called “The Rhône Rangers,” Americans making wines here using grapes and techniques from that region. He changed the wine’s mix substantially in 2018, believing it had lost its appeal, before selling it off as part of the deal.

in case you’re wondering, the wine doesn’t have any beeswax in it; that’s the name of the vineyard near Carmel, California, close to the ocean and enjoying those cooling breezes. Some say it does have the aroma of beeswax, but I’ll leave it up to others to describe what that is.

I’ve known about and loved the French “Piquepoul” version for decades but had never had an American version until my friend Paula turned me on to it. This wine can be had for as little as $16 up to about $20. While not cheap, it’s not expensive either and that’s a good thing, as this is a damn good wine–original, refreshing, and by the way the “sting” doesn’t hurt, maybe tingles a little!! It’s great with raw oysters, and to me it’s just a fabulous aperitif wine for any occasion, never failing to get a “this is great” reaction from people tasting it for the first time,

A Quick, Brisk Trip to Greece and Georgia (not the US state)

Granted it’s a long name.  But it’s a great wine, made from a pretty interesting…