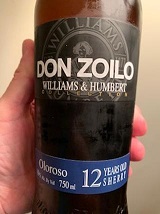 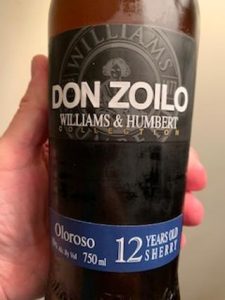 Wine-Flair Wine of the Week is Don Zoilo Williams & Humbert Oloroso Sherry, 12 Years Old. Many Americans have heard of Sherry but relatively few have ever tasted it, and I’ll wager that most of those few have only as “cooking Sherry,” found on a grocery store shelf for $3.99, and something that ends up in their Coq Au Vin, if they’re had that.  Which is too bad.  Not the Coq au Vin, I mean.

Sherry, authentically in Spanish “Jerez,” (or Xérès) isn’t like any other wine you’ve tasted. Although Sherries are a fortified wine like Port, which means grape spirits are added that up the alcohol content, most aren’t sweet, except for Pedro Ximénez and Moscatel. Sherries are made mostly from the Palomino white grape,  in styles ranging from light and dry from Fino to Manzanillo to Amontillado, to a bolder and richer version called Oloroso. All Sherries are Domain-name controlled wines (DO or DOC) that come from the Jerez region in far southwest Spain, not too distant from Gibraltar and right on the Mediterranean.

This one, a bold and powerful 19% alcohol, is a “dry Palomino” style, and certainly not cheap cooking wine, priced between $25 and $30…and very well regarded by Sherry-drinking peeps. It’s got a very nutty and yeasty flavor profile, and not usually drunk with meals, but rather as an aperitif or a dessert wine. I first tasted it in Morocco quite awhile ago at the home of the British Defence Attaché, whose lovely wife handed me a small, sculpted crystal glass of Sherry before I got past the foyer in their home, on a dinner invitation. I guess that habit, and the wine itself, are a tradition of the English. Surely you’ve seen movies in which someone in England invites another into a dark-paneled room and asks “Sherry?” before fomenting some scheme or revealing a secret.

In any event, my first taste was not offputting but confusing: what was this? And how in world was this white wine, tasting nothing remotely like Chardonnay or Riesling or Pinot Grigio, those all fresh and fruity?

Well, that’s the uniqueness of Sherry, which in some styles at the lower alcohol range are aged in barrels and form flor, a yeast growth that helps prevent oxidation. Higher-alcohol styles like this one don’t form flor, and as a result have some oxidation that gives them a more concentrated flavor and sometimes a bit of color, or colour if you prefer. And not to get too deep into wine geekery, you’ll notice that there’s no vintage year, because they’re mixed from wines of different years in the so-called “Solera” system, so some of them will carry both young and much older vintages.

If you want to try something “completely different” as the Brits say, try this Wine Flair Wine of the Week. Cheers!

Italy is (a) wine country. So of course, surely, you’ve heard the names of these…

This site uses Akismet to reduce spam. Learn how your comment data is processed.