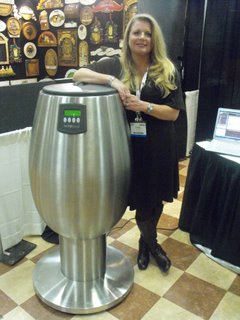 If you’re a serious home winemaker, you should look into the WinePod. I did, last week at the Wineries Unlimited event in Valley Forge, Pennsylvania, where I spent some time with Tracey Mason, the VP Sales and Marketing of Provina, which makes the WinePod.

Aside from being aesthetically attractive – cool looking, that is – the WinePod is by far the most advanced small winemaking system I’ve ever seen, and it’s attracted the likes of Cornell and UC Davis, which are top schools for winemaking and grapegrowing in the US. These and other universities will use it for research, but you can use it to make great wine – about four cases of red at one time, or five cases of white.

The WinePod is about as self-contained as they come, with a 75 liter, stainless steel fermentation tank that is completely temperature-controlled, from 50 to 100 degrees Fahrenheit. It’s got a built-in press for initial crushing of the grapes, or you can do an initial cold-soak maceration, where the juice is cooled and held at a constant temperature to increase fruit flavors before the fermentation begins. The unit also has a wireless Brix sensor, which allows you to monitor the sugar levels of your must (fermenting grape juice) pretty effortlessly throughout the entire process. The sensor itself sits in a cage at the bottom of the tank and pops out for easy cleaning, and self-agitates periodically to ensure that you’re getting accurate readings. And there’s an airlock on the variable lid so that you can take and taste samples during fermentation without having to pump any of the juice, something that winemakers don’t like to do if they can avoid it. The entire unit weighs just 125 pounds and is easily moved using built-in, retractable casters. 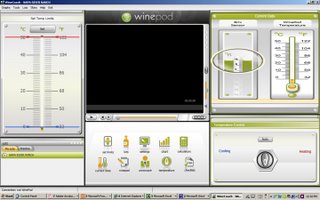 If you’re making red wine, you can set up a fully automated punchdown to push the cap of skins, seeds and stems through the juice periodically to extract color, tannin and other important things according to the style of wine you’re going for. You can also program the WinePod to “submerge” the cap for maximum extract. And starting next month, with the newest version of WineCoach software, you can set the unit up to mimic the fermentation profile of a large commercial fermenter (although I’m not entirely sure why you’d want to unless you are doing academic research).

And you can run a whole line of WinePods from a single laptop, each making a different style of wine if that’s what you want. Provina says that their pomace removal system makes cleanup a snap, which I believe after seeing the unit up close, although I didn’t see that demonstrated. The software, which comes with the WinePod, gives you detailed readouts at any time, but you can get basic information such as temperature and degrees Brix from an LED readout on the front of the tank.

The WinePod is $4500 – not a tiny investment, but not really a king’s ransom, either, and certainly worthwhile for a serious home winemaker who wants to make a superior product under carefully controlled conditions. There’s also a “Garagiste” system, shown at right, which is sort of a WinePod “light” and costs under $2000, although it lacks most of the bells and whistles that make the WinePod so cool and advanced.