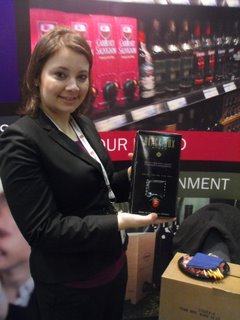 While at last week’s Wineries Unlimited show, I stopped by the booth of the Scholle company from suburban Chicago, which makes liners and spigots that go into some of today’s best boxed wines.

Now, let you think that “best” and “boxed” are mutually exclusive, I did taste several wines using Scholle packaging and some were quite good. I especially enjoyed the Black Box (aptly named) Cabernet pictured here with marketing manager Katie Scarpelli, as well as a Sauvignon Blanc and a Malbec from two other producers. And despite a “few” tastings before I arrived at Scholle’s booth, I picked out from across the room their signature spigot, which I saw a couple days earlier in a news release photo of the Red Truck wine mini-barrel, another product that Scholle supports.

There is and will continue to be a prejudice against boxed wines among fine wine consumers. But this issue is really less about the packaging and more about the willingness of fine wine producers to put good stuff into those boxes. And as much as I enjoyed the Black Box Cab – and I did – I understand that they’re rather inconsistent producers, with one good batch here and a mediocre or poor one the next. So the boxed wine industry is going to have to contend with and ultimately tackle that issue to be successful: they have to deliver good wine, not plonk, and they have to do it consistently. And like adopting any new thing (think of the early days of screwcaps) it will take time.

Of course, in the age of Obama, the industry may have a little help as the general public increasingly pays attention to carbon footprints; the box wine industry can rightly claim to have much smaller feet. And they can point to a number of other advantages over bottles, such as no worries about cork taint; easy storage and transport; and a shelf life of up to 40 days as the liner collapses as you drink, keeping air out. These really are ideal for on-premise sales (bars and restaurants) of value wines, among other uses. And they’re good news for the winery, too, as they cost a fraction, maybe 15%, of traditional bottles, all-in.

Stay tuned as I find more good (I hope) boxed wines to taste. And to learn more about boxed wine, go here.

Sparkling wine is viewed all too often as a luxury, a “wedding wine,” or something…

House Resolution 5034, introduced by the National Beer Wholesalers Association (NBWA), is supposed to be…