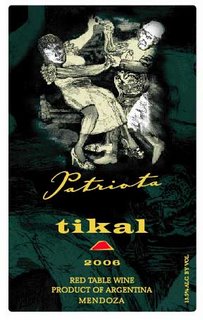 Meritage, as you may know, is a kind of proprietary red wine made by any number of producers in California. It’s supposedly done in the “Bordeaux style” which means it must have at least two of these varieties – Cabernet Sauvignon, Cabernet Franc, Malbec, Merlot, and Petit Verdot – and can have all five, though few do. To be labeled a Meritage wine, the winery has to be a member of the Meritage Association and follow a few rules. But that’s not something for you to worry about.

Anyway, I like my share of Meritages, although they tend to be more fruity, dense and powerful than Bordeaux wines. I’ve enjoyed Buena Vista, Charles Krug, Cosentino, Ehler’s Estate, Guenoc, Murrieta’s Well, Rodney Strong, Sterling, and many more – and these are pretty affordable. Other red wines made in a similar fashion but without the Meritage label or “official” designation spring to mind – Cain Five and Cain Concept, Joseph Phelps Insignia, Dominus, Opus One and Rudd stand out. Good wines? Yes, and some are exceptionally good, Insignia in particular. But remember, the low end on some of these proprietary wines is maybe $150 per, for a very recent bottle in only a decent vintage.

Regardless of cost, if you’re subsisting on these California blends, or the classic Bordeaux, from Premier Crus to Crus Borgeois, you’re probably missing the charms and pleasures of a legion of other blended reds. Specifically here, I’m talking about the “non-traditional blends” that often include Bonarda, Carignane, Carmenere, Counoise, Malbec, and Syrah. These come from South America, and are great values, most under $20 and becoming more widely available all the time, especially as bargain-conscious drinkers have moved down and stayed at that price point. And they are simply outstanding wines that stand on their own.

There are also a lot of so-called Rhone Blends around, which some say are trying to mimic the famous and very expensive Chateauneuf du Pape, a mid-priced bottle of which can go for around $50. These are based on red Grenache, one of my favorite grapes, but like the French AOC version can have a whole mess o’ grapes (French wine laws allow up to 13 specific varieties). The American versions are a whole lot cheaper, with the occasional exception, and they, too, deliver great value and an exceptional drinking experience.

I haven’t listed vintages on purpose because I don’t want you to limit what you try or fixate on a given year. The prices given are for the vintages that are in stores and online today.

Primus, from Casablanca Valley, Chile.
Based on Merlot and a significant though lesser amount of Cabernet Sauvignon, this also has a healthy dose of Carmenere. Tremendous stuff. Around $20.

Patriota, from Tikal in Mendoza, Argentina.
Based on the Bonarda grape, with a large proportion of Malbec. $19-20.

Expresivo Ben Marco from Mendoza, Argentina.
Talk about your kitchen sink – Malbec, Bonarda, Cabernet Sauvignon, Merlot, and Syrah. The ’07 will run you about $18, earlier versions a bit more.

Roodeberg Red, from KWV South Africa. They never really say what’s in it, but I’m told Cabernet Sauvignon, Merlot and Syrah. It’s cheap (the ’06 is under $10) but consistently good.

Esprit de Beaucastel, from Tablas Creek in Paso Robles, California.
Mourvedre, Grenache, Syrah and Counoise. About $18 (the white blend is about the same).

Le Mistral from Joseph Phelps in Napa, California.
Syrah, Grenache, Carignane, Petite Sirah, and Alicante Bouschet. The 2006 is pricey, at $36-39.