The Pioneers: Jack And Jamie Davies Of Schramsberg 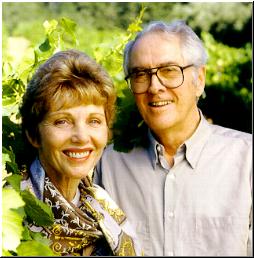 “For more than a year now they had been searching: on the highway, near the river, atop oaky knolls that rose abruptly from the valley floor, up wild canyons, and along the spines and scarps of two rugged coastal ranges. What they were looking for was not easily put into words, but the quality of the ideal was absolute and unassailable in their minds. They were searching for…they would know it when they found it.”

– The opening paragraph of Napa by James Conaway

Jack and Jamie Davies were modern-day pioneers, and the mark they left on American winemaking is truly meaningful and, I hope, lasting.

It’s ironic that far too few Americans have heard of Schramsberg, much less tasted what is perhaps America’s finest and “truest” sparkling wine.  But the name and the property have a storied history dating back to the mid-1800s, and I’m driven to tell the story myself. 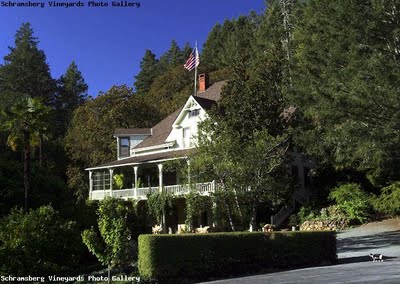 Jack Davies was a successful salesman and entrepreneur when he and young bride Jamie left a comfortable, secure life in L.A. and moved to a dilapidated Victorian house atop Mt. Diamond, south of lonely, tiny Calistoga, California at the top of the Napa Valley. Neither knew anything about winemaking, nor did they know a single soul in all of Napa. And the house they’d bought, with all its promise, was mostly a haven for bats and rodents. The Davies were not just taking a chance, they were gambling their very futures – with a four year-old son and another on the way.The Schramsberg story is itself iconic of the early years of Napa winemaking. Jacob Schram was a German immigrant who worked as a barber in New York after arriving in 1842. Ten years later and presumably filled with wanderlust, he set off for San Francisco, finding his way to the Napa Valley. No longer content with the life of a barber, in 1862 he purchased 200 acres of hillside vineyards. 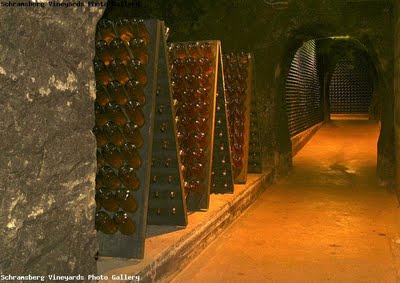 Eight years later, scores of Chinese laborers were digging wine storage caves into the hillside, and a second set in 1881. Today, those caves hold hundreds of thousands of bottles of outstanding sparkling wines, many of them meticulously turned or “riddled” by hand.Before Jacob Schram died in 1905 he was producing at least six varietal wines bearing his name. William Henry Harrison, President of the United States, was served Schramsberg Riesling when he stayed at the famous and still operating Palace Hotel in San Francisco. By the time of prohibition the Schramsberg wine estate had become a summer home for the wealthy and didn’t produce wine again until 1951, when the property was resurrected by Douglas Pringle, who produced both table and sparkling wines. but almost as quickly, Pringle died and his widow padlocked the place. The Schramsberg legacy might have ended there.

But it didn’t.Fast forward to 1965. Jack and Jamie clear the bats from their home – with the help of a volunteer from the St. Helena Police Department – and are there to stay. They set off to produce their first vintage, but don’t have and can’t find any Chardonnay, the base wine they need. Eventually, Jack barters some Riesling grapes he’s bought for 500 gallons of Chard. And he barters for it with the General Manager of the Charles Krug Winery, a guy names Robert Mondavi, whose name at the time wasn’t known outside Napa. How things would change for both families!It wasn’t all, er, wine and roses on that hill. Chardonnay doesn’t grow well on Diamond Mountain, nor does Pinot Noir – together the two principal grapes that go into Schramsbergs. So the Davies built relationships with many winegrowers over many years such that today, they source their grapes from dozens of vineyards as far away as Mendocino County. Although that creates huge logistical problems, they somehow get their grapes in every year, and the results are spectacular.The business, the Schramsberg name, and the Davies would flourish. Richard Nixon toasted Chinese Premier Chou En Lai in Beijing in 1972 with a ’69 Schramsberg Blanc de Blancs.

Today the place is run by son Hugh, and it’s clear that nothing has been lost over the years in terms of quality or tradition – or dedication to excellence.At least once a month I pull a bottle of Schramsberg outta the cellar, chill it, and toast Jack and Jamie..whom I unfortunately never met.

If you love sparkling wine, you should, too.