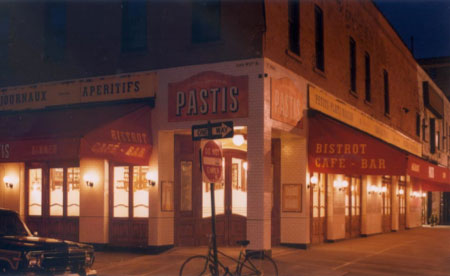 After a delicious lunch at Bond 45 on Times Square (don’t laugh, it’s a great place) and a matinee of Jersey Boys (including Lehman High School grad Matt Bogart) we headed downtown to, once again, the meatpacking district.

After a long, hot but enjoyable stroll on the Highline Park, we ended up at Pastis, a traditional French Bistro at the corner of 8th Avenue and Little West 12th.

The place is simplicity itself, and rightly so. Named for the Anise-flavored (think black licorice) aperitif from the south of France, also known as Ouzo in Greece and Arak in the Middle East, Pastis offers a nice selection of wines in very friendly and affordable formats – by the glass, half-carafe, carafe, and full bottle. This is a great way to sample a number and variety of wines over the course of an evening without ending up horizontal, either literally or financially.

The wine list is perfectly suited to the joint.  Among the reserve selections, the Champagnes are uninspired and overpriced, but there are some really interesting blancs (a Chateauneuf, an Aligote and a Cotes du Luberon, for example), and rouges (a delicious Gamay from Fleurie, a Cab/Syrah, a Vacqueyras and a Chinon).  But focus instead on the house wine list – great, and great matches for the food, with a nice cross-section of whites and reds, and a couple of roses thrown in for grace notes.  Actually on a hot summer day I’d have liked to see a few more of those. The full list is here.

The food is classic bistro, with appetizers ranging from a mousse of chicken liver and fois gras, grilled sardines, fried calamari and steak tartare.  Of course you can get steak frites here, but at a surprising $35 it was the priciest thing on the menu and we passed.  Instead, our entrees of Veal Milanese and Poulet Citron were delicious, plainly presented without pretension, and surprisingly generous.  I guess the American appetite for enormous plates has found its way across the ocean a bit, but on this night the slightly above-average portion sizes were welcome.  Great french press coffee and an amazing apple torte a la mode finished off the meal, followed by a couple glasses of dessert wine.  Yes I know Esquire says after coffee you’re done, but what the hell do they know?

Anyway, the restaurant is just what you’d expect and want – checkerboard tile floors and worn wooden tables – but the place is more open, airy and the tables less crowded together than at all the French bistros I’ve visited in…France.  Service was superb; our waiter Jake (and the guy who filled in for him for 30 minutes at the start of the meal) was close by just enough without being obtrusive, checked on us at the right time, kept our glasses full and our new wine selections coming, and did it all with delight and a smile while navigating a large bar crowd in addition to his tables.  Just great.

When I Googled the place for images (I ended up using the one from the restaurant’s website) I saw that a lot of celebs eat here – Beyonce, Adriana Lima, Peter Fonda, Sienna Miller and Jude Law, Sandra Bullock, on and on.  So, if that’s what you’re into, stop by, by all means.  We came for the food, the wine and the atmosphere and we were not disappointed!