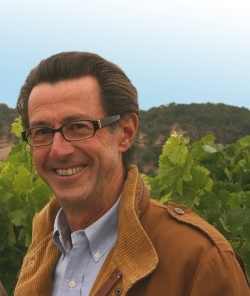 On April 25 I was privileged to enjoy an evening with Christian Moueix (“Moo-ecks”) of Petrus and Dominus fame, as a guest of Sherry-Lehman CEO Chris Adams.  Monsieur Moueix hosted a tasting of his Dominus and Napanook wines, with paired cuisine from Manhattan’s Hotel Plaza Athenee.

I’ve been drinking his wines all my adult life and so I felt like I’d known Christian ever since I’d read Napa: The Story of an American Eden. In that book, one of my five favorite wine books, we hear about how Christian, who’d studied winemaking and viticulture at UC Davis, was first approached by Robert Mondavi who was in Bordeaux for the 1981 harvest, and had met with Christian and suggested that he consider expanding the Moueix family horizons beyond France. Those horizons alone were considerable; at they time they included the famed Chateau Petrus, and Chateaux La Grave, Magdelaine and Tratanoy.

Eventually, the ever-persuasive Mondavi got Christian to fly to California, where he literally set him up with two sisters of California wine royalty, Robin Daniel Lail and Marcia “Marky” Daniel Smith, the daughters of Napa pioneer John Daniel, the former owner of Napa’s Inglenook winery, the closest thing Napa’s ever had to a French chateau. John Daniel and his sister had become the sole owners of the winery in 1937 and is responsible for many then-unheard-of innovations such as vintage dating and labeling the bottles Napa Valley. Some very unhappy personal circumstances had forced John to sell Inglenook in 1964, but the historic Yountville vineyard Napanook wasn’t part of the deal, and most of it eventually passed on to Robin and Marky.  Together they went into business with Christian to produce the luxury Dominus wines (first vintage 1983) from that vineyard, which they then jointly owned until 1995, when Christian became the sole owner. The Napanook wines are the second wines produced from the vineyard and began production in 1996.

At about 6 foot 3, Christian often towers above everyone else at a tasting, and he reeks of elegance and erudition. But aside from his thick accent he’s about as down to earth as they come, and our dinner was punctuated with laughter as he popped up only briefly from his table to introduce each wine, often with a self-deprecating line or joke.

A true gentleman farmer and a distinguished winemaker, it was a thrill to spend an evening with Christian and his lovely wife Cerise.  Many thanks to Chris Adams and the fine folks at Sherry Lehman.

Now for the wines:

Magdelaine 2008: A big, bold wine, dense in color, with big and chewy but not off-putting tannins. Wonderful. Average $75 retail.

Dominus 1996: A lovely perfumed wine but getting a little thin. Average $110 retail.

Dominus 2006: Promising but still young and a little rough around the edges. Average $90 retail.

Dominus 2008: Lush and delicious, remarkably drinkable right now and sure to get better all the time.  Average $155 retail.