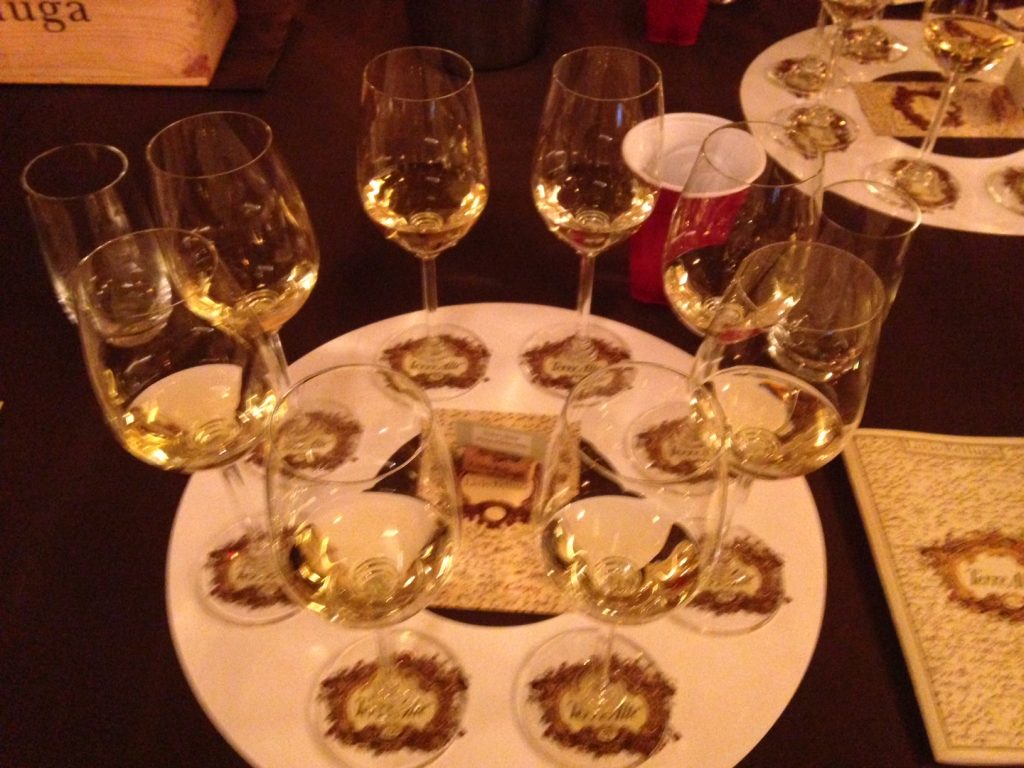 When you think of Italian wine—and I’m just guessing here—you probably think of reds. Dr. Hannibal Lecter aside, Chianti is the wine everyone knows best, made from Sangiovese grapes grown in Tuscany, and it’s a truly great food wine.  Amarone, one of my favorites, is lush and powerful, with a hint of sweetness, made from partially-dried Corvina grapes, and works best with rich food. And Barolo and Barbaresco wines, made from the Nebbiolo grape, are among the greatest red wines of Europe.  And of course there are the Super-Tuscans, fairly expensive wines often (but not always) made from a base of Sangiovese, and then “suped-up” with Cabernet Sauvignon and/or Merlot.  The most famous of these, Sassicaia, actually has no Sangiovese at all, and can retail for $200 a bottle.

If you think of any white wine from Italy, it’s likely to be Pinot Grigio.  PG used to be and probably still is the most popular imported wine in the United States, and what my friend Tina Caputo of Vineyard and Winery Management magazine calls “accessible.”  Well, she’s right.  But much of it isn’t terribly good, with little aroma, body or flavor. Now, there are Italian whites of note—Prosecco, of course; Gavi, from the Cortese grape; Lugana, made from Trebbiano; and of course Soave, made mainly from Garganega.  And then there’s always Chardonnay.  I guess everywhere, there’s Chardonnay.  But I don’t know that I can name a truly standout Italian white; I mean something I crave, or crow about.

That’s why I was really looking forward to tasting some Italian white wine that just might be memorable, and also a wine with which I wasn’t so familiar.

So I was excited as I walked into Bettony restaurant on West 57th in Manhattan and bounded down the steps to the private dining room, set up more elegantly than for just about any other tasting I’ve ever attended.  I was the first guest there, but before my friend Jane could introduce me to our winemaker host, Andrea Felluga, she had to tear him away from several magnums of Terre Alte, which he was opening and tasting in advance of our arrival. Over the next couple hours Andrea treated us to a “vertical” tasting of these interesting and unique whites, in this case eight vintages ranging from 1997 to 2012. Literally, “high land”, Terre Alte is a blend of Friulano, Pinot Bianco and Sauvignon Blanc wines, from grapes grown in Friuli in far northeastern Italy.

The winery was founded by Andrea’s father Livio Felluga, whose name is on the label, and he bottled a first vintage in 1956. But these were single-grape varietal wines; Terre Alte wasn’t born until until 1981, and that was only after a long struggle by Andrea’s Brother Maurizio, finally persuading his father that a blended wine was the key to the future.

This break with tradition was significant, because while the Friulian winery was relatively new, the family’s history in the business spans five generations, and began in the Istrian peninsula, in what became Yugoslavia, and is today shared by Italy (a tiny slice), Slovenia and Croatia. In the 1930s, Livio, having made only two vintages, headed off to WWII, and when he returned home, the family had lost all its vineyards in Yugoslavia.  They ended up working the slopes of Friuli, where Livio, Mario Schiopetto and a few other pioneers had set about creating a Friulian “archetype” white wine.  By the 1960s they were producing pure, light, aromatic wines from gently-pressed grapes fermented in antiseptically-clean and refrigerated tanks.

The base of Terre Alte is Friulano, but for decades, maybe centuries, it’s been known here as Tocai.  Some wine scholars say it’s related to Furmint, which is the grape used to make the rich Hungarian dessert wine Tokaji, and to avoid the confusion (though you’d never confuse the dry, crisp Terre Alte with the cloyingly sweet Tokaji) the locals all refer to the grape as Friulano now.  There are more stories about a more modern version of Friulano related to another grape, but I won’t bore you.

Anyway, the tasting.  We began with the 2012, which as Andrea admitted, is “hardly wine” at this very early stage.  I agreed.  And enough said. The others, though, were truly interesting, and some were outstanding.  All of these wines generally have many of the characteristics of Sauvignon Blanc—nicely refreshing—but are certainly more complex, with varying amounts of fruit, and they all age nicely.

Terre Alte 2009: Soft, round, and rich, with a hint of vanilla and a short finish. Not my favorite.

Terre Alte 2008: Perfectly balanced, with a touch of ginger, and a long finish.  Outstanding.  Best of the lot!

Terre Alte 2006: Fresh and fruity (thanks, Denny’s) which is unusual for these wines. Just a hint of sweetness. Very nice.

Terre Alte 1997: Does show its age; softer, lacks the acid it needs for balance.