One of the ways I’ve learned about wine, oddly enough, is to read wine books. And here are some great book for Christmas. These are a few years old but I really enjoyed them.

NOTE: COMING SOON–Reviews of “The Billionaire’s Vinegar: The Mystery of the World’s Most Expensive Bottle of Wine,” AND “The Widow Cliquot: The Story of a Champagne Empire and the Woman Who Ruled It,” AND “Wine and War: The French, the Nazis, and the Battle for France’s Greatest Treasure.”  All are available on Amazon.

You can of course get dozens of tasting books, and there are many more about pairing wine and food.  And for those who  get into wine geekery like me, there are books such as Clive Coates’ The Wines of Burgundy, or Vino Italiano- The Regional Wines of Italy, that can take weeks to read and are more appropriate for people studying for their MW or Sommelier certification rather than casual wine drinkers and even dedicated tasters.

For my money and yours, though, I recommend that you have some fun while you learn, and for that reason I’m going to recommend three, all narratives, without boring statistics about the number of grand cru vineyards in Burgundy, how many clones of Chardonnay there are, or how long it takes to apply extra toast to a brand-new French oak barrel. Now, I write about Robert Parker pretty often. He’s a force in the wine industry, to be sure, and called the single most influential wine writer alive.  But I think of him more as a wine “rater” than a writer, and I just don’t buy the notion that you can reduce the quality and pleasure of any particular wine to a specific number with mathematical certainty. For that reason, I was eager to get my copy of Alice Fiering’s 2008 book, The Battle for Wine or Love or How I Saved the World from Parkerization, and plunge into it. 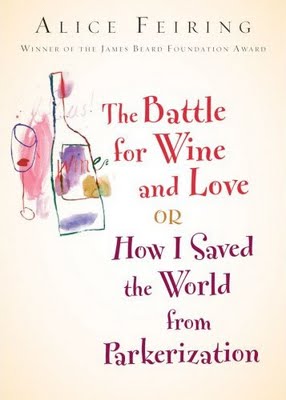 I gotta tell you, I had a little bit of trouble with the premise to begin with. The truth is that I don’t think Alice has saved the world from Parkerization, the idea that wine writer Robert Parker has overly and to many people, undeservedly influenced what kind of wine people like and therefore what they buy.  To me, her title, like a lot of the book, is too clever by half.  In fact, throughout the book, she laments the fact that winemakers around the world hold their noses to Robert Parker’s grindstone, praying that the so-called “Emperor of wine” will grant their wines a 92 rating or above, because that magic number pretty much assures a wine commercial success.  To get his attention as well as those ratings, says Fiering, these winemakers use technology to excess, grossly over-oak, focused absurdly on color, and just generally make a mockery of the “natural” winemaking practices used by their grandfathers. In the bargain, she says, many if not most wines have lost their nuance and finesse and amount to little more than syrupy-sweet plonk, one wine indistinguishable from another. She clearly believes this and makes her case over a couple hundred pages…fair enough. But I suppose in an effort to make her book charming and “full-bodied,” Fiering insists on telling us intimate personal details along the way, especially around her love life and the many men who find their way into and out of her journey from New York to wherever.  Worse still, she gives them each a pet name (“Owl Man”) as she does a half-dozen female friends who often accompany her on trips to this symposium or that wine region.  Such stuff weighs down the book in much the same way Ms. Fiering says modern winemakers weigh down their juice with alcohol, tannin, oak and sweetness. Still, big parts of the book are a lot of fun – they read like a travel log and give you those rich and interesting back stories about why wines are made the way they are, and what those winemakers are thinking.  There are some insights here, and it’s an easy-reading page turner. There’s a little discussion about organic and biodynamic winemaking, but it’s hard to tell whether she’s applauding or making fun of the grape farmer who harvests according to phases of the moon and plants a ram’s horn filled with cow dung in a corner of his vineyard. When all is said and done, my only real complaint is this: she has the opportunity on several occasions to just tell Mr. Parker what she really thinks: that he’s done huge damage in a quest to get winemakers to produce wines that appeal solely to his palate. But each time she approaches the line, Ms. Fiering backs off under one pretext or another — not wanting to hurt the great man’s feelings, or provoke him to walk away from the interview. If this is saving us, we ain’t saved. 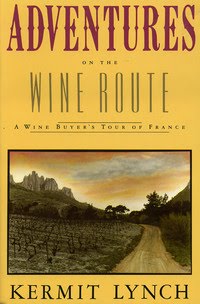 By contrast, Adventures on the Wine Route – A Wine Buyer’s Tour of France, is pure pleasure: personal but not uncomfortably intimate, written with equal or even greater conviction but with no sign of a chip on his shoulder by Kermit Lynch, a pioneering wine importer who just happens to be a great narrator.

Like Fiering, Lynch is passionate about artisanal wines, but he makes his case more by talking about who is making them rather than who’s not.  And his view that “Wine is, above all, pleasure. Those who would make it ponderous make it dull” runs through his chapters and paragraphs, which are by turns funny, absurd, colorful, quirky, and sometimes all at once. I think he’s equally unhappy about the power of ratings as the gold standard for wine consumers, oddly enough given that he’s an importer and a commercially successful one at that. As you might expect, he raves about a great many wines on which his own fortunes turn, and in this sense he’s certainly not a disinterested critic like Alice Fiering.

Nonetheless, if you really want to get a feel for how the art and craft of wine works in Europe, run out and buy this book. You can read a lot about Bordeaux and Burgundy elsewhere, but you won’t often find these kinds of stories about winemaking and wine styles of the Loire Valley, the Languedoc, Provence, Chablis, or Beaujolais for that matter. And if you really like the culture of wine and not just the taste of it (or the buzz you get from it) this book will enrich both your mind and your spirit. 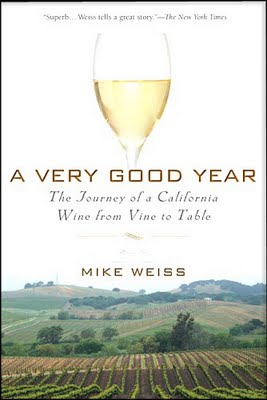 From a little closer to home in California’s Sonoma Valley comes A Very Good Year, a truly inside look at winemaking by Mike Weiss. Originally a series in The San Francisco Chronicle where Weiss was a staff writer, this narrative tracks the 2002 vintage of Ferrari-Carano Fume Blanc (Sauvignon Blanc) as it goes from vine to glass, from the field and crush pad to a white-linen restaurant table in Manhattan.  Along the way we meet the wealthy owner and his muse, the winemaker and his lieutenants, the vineyard manager, the head of sales and marketing and his sales minions.  Most poignantly we meet the ordinary field workers, one a tragic character who takes his own life in Mexico after the 2002 harvest.

Into these personal stories are interwoven professional jealousies, seemingly creative decisions based mainly on accounting spreadsheets, the false ostentation of California wine culture, and the real power of some wine writers that would make the personalities in Falcon Crest blush like a dry rose.