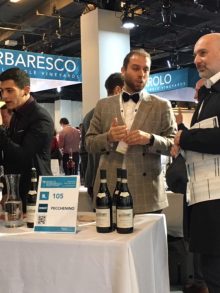 The Barolo region of Itlay’s Piedmont is home to one of the world’s most distinctive wines…and often one of its more expensive. There are 59 wine regions in Piedmont (Pee-ah-mon-tay) and it’s home to a lot more great red wines: Barbera, Brachetto, Dolcetto, Friesa, and Grignolia, but for my money, Barolos are what you want. White wines from there include Asti, Gavi, and Arneis.

The berries (grapes) of Barolo wines are small, very tannic, rather high in acid, and there’s only one variety: Nebbiolo.  Barolos must be at least 13% alcohol and be aged for at least two years in oak and one year in bottle, and those labeled Riserva must be aged at least five years before release, with a least three of those years in oak. They are late-ripening so need a lot of sun exposure, and are planted on mostly south-facing slopes on foggy hills from 500 to 1500 feet above sea level.

They have a reputation for being expensive and something to be saved for “special” occasions, but in keeping with my philosophy I say every day is special, and wine is for drinking and not for keeping. They have an intense aroma, which many describe as of roses and woodsmoke (which I get) and tar (which I don’t quite get). They certainly age well, and some folks are put off by the power and tannins of the younger wines, but to me, they’re ready to drink soon after release if you want something memorable, wines that some call the “King” of all the Italian reds.  I think they’re close to that, but maybe “Dukes” instead in my view, given that my top wine of Italy is the powerful Amarone.  Some compare it to the best of Red Burgundies, which I find bizarre, but for sure it’s a grape that ir almost unheard of outside its region. It does get that red-brick color along the rim with a little age, similar to the Pinots.

Barolo has a little sister named Barbaresco, which in general is lighter-bodied, fresher, and lower in tannin and requires only two years of aging rather than three. For my purpose here, though, I tried only Barolos from the 2015 Vintage.

*My choices. There were 145 producers listed at the tasting tables, and more others from single vineyards than I could count.  Among those I tasted, none had fatal flaws and all were nicely palatable, but a few stood out.

Diego Morra Monvigliero 2015. Easy-drinking but not wimpy by any means.

L’Asternia Pentita Barolo Cannubi 2015. Balanced yet unusually rich. Which is saying something.

*Pio Cesare Barolo 2015. Rich and powerful, from one of my favorite producers of Amarone.

Virna Barolo Cannubi 2015. Mouth-puckering tannins. Not my cup of tea.