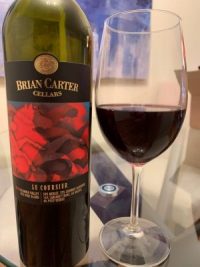 A Meritage by Any Other Name…

California Cabernets, especially from Napa, are well known for their power, richness, tannin, high alcohol…and too often, astronomical price. Those in the “cult” category such as Screaming Eagle or Harlan Estate can fetch hundreds of dollars or more per bottle, and are difficult or impossible to get unless you’re a “VIP” customer and on the allocation list.

Don’t get me wrong: there are some outstanding Napa (and Sonoma, for that matter) Cabs at “fairly reasonable” prices and they, too, have a devoted following, albeit among us normal folk. And given that I’m a #1 fan of Bordeaux, years ago I discovered “Meritage” wines, produced by a group of American vintners that formed The Meritage Alliance in 1998 to produce and promote wines blended from at least two of the traditional five Bordeaux varieties: Cabernet Sauvignon, Merlot, Cabernet Franc, Petit Verdot, and Malbec–and also allowing Gros Verdot or Carmenère.

Wines by law can be labeled by the variety name if at least 75% is from a single grape–such as labeling a wine Merlot even if it has up to 25% Cabernet Sauvignon as long as the rest is Merlot. But some vintners were happily creating Bordeaux-style blended wines that were sometimes referred to as “proprietary” wines or simply “red table wine.”  So a group of vintners got together, created a contest to give these unique blanded wines a name, and the winner chosen from thousands of entries was “Meritage,” pronounced like “heritage” and reflecting, logically enough, wines of merit and heritage.

Meritage wines and the Meritage name were in vogue for many years and highly-sought-after, but vintners have to pay to join the alliance to use the “Meritage” name on their labels, a benefit of limited value. So the enthusiasm to produce and label these blends as Meritage seems to have worn off several years ago, but high-quality blended wines in the same Bordeaux style are still being produced, minus the name, and I’ve just tasted one that I find outstanding: Brian Carter Cellars Le Coursier 2013. 54% Merlot, 22% Cab, 14% Cab Franc, 6% Malbec and 4% Petit Verdot. Rich but not overpowering, this wine has more nuance than a lot of Napa reds, and it’s still young and could use a bit of aging and softening in the bottle. Nonetheless, it’s a delight, drinkable now, and if you can get your hands on some, I suggest you do!