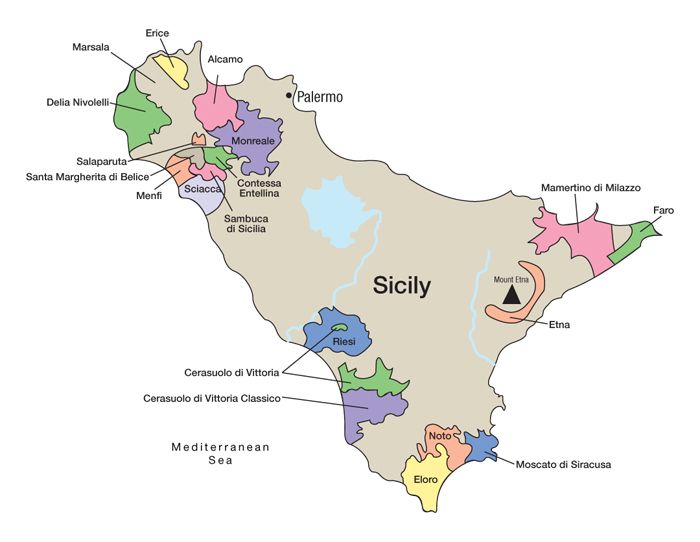 So perhaps you’ve had one, more, or many, depending on the restaurants you frequented before Covid19 hit, and maybe once, years ago (or last fall) you had a very lousy cheap one at a college party where a brave soul put $7 on the line for a bottle of sweet, watery, insipid and essentially undrinkable Lambrusco. And yet, you did drink it.

Well, Italy has some wonderful wines, nonetheless. I wrote about them recently, before this God-awful virus hit–Brunellos, Barolos, and some Rosés from Ceraluso d’Abruzzo.

But let’s not forget Sicily (Seh-Chill-ee-ah), possibly better known as the home base and origin of La Cosa Nostra. Lying directly to the southwest of the Italian peninsula, all of the wines from Sicily since 2011 are classified DOC (Denominazione di Origine Controllata), up from the previous IGT (Indicazione de Geografica Tipica) classification, and it has 24 sub-DOCs and one DOCG (Denominazione di Origine Controllata e Garantita) region. Its generally hot and arid climate reduces the incidence of grape rot and mold, and it’s believed to have produced wines for 6,000 years. While it was known in the past for cheap bulk wines, now it gains yearly in its reputation for quality and interesting varietals.

The largest island in the Mediterranean, Sicily produces some excellent if lesser-known wines than its larger neighbor Italy. Among the many reds are Cerasuolo (Nero d’Avolo and Frappato, from the one DOCG Region) Nerello Mascalese, Nero d’Avola, and whites Alcamo, Catarratto, Chardonnay, and Marsala (Frappato and Nerello Mascalese).

I’d like to highlight one particular white that in my view is a standout, recently introduced to me by my good friend Jonny B from Houston: Etna Bianco, a great seafood and especially shellfish wine, and yes it’s from the Mount Etna region in northeast Sicily from obviously volcanic soil at a higher altitude than most Sicilian wines. Etna Bianco wine must have at least 60% of the Carricante grape, while Etna Bianco Superiore must contain a minimum of 80% Carricante. The Catarratto grape is also allowed in Etna Bianco and the most common secondary grape allowed. These wines define tangy and crisp, and are also described often as lemony and even a bit salty. Well-known producers are Benanti, Alberto Graci, Planeta, and Terra Costantino.

There are also Etna Rosso (red) wines which must have a minimum of 80 percent Nerello Mascalese, an indigenous variety produced only in that region, and typically blended with Nerello Cappuccio. These are less well-known than Etna Bianco and range from strong and tannic to lighter and brighter (from higher altitudes) and sometimes compared to Pinot Noir.

In closing, you might have to call around to several of your local retailers to find Sicilian wines, or even order online. But you’ll find unique varietals and you’ll be the toast of your neighbors, at the very least, if you take a bottle or two over to a…well, quarantine party. Good luck drinking through your mask.