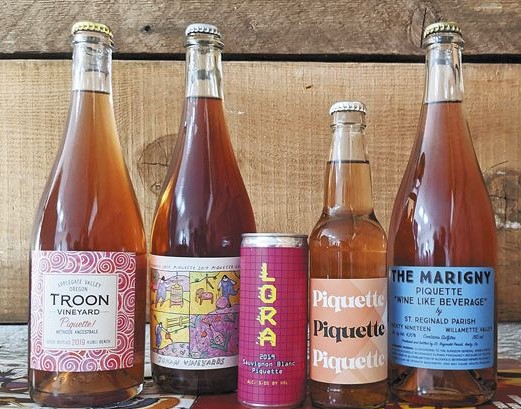 A Beverage “Like” Wine, and Yet Not, in Vogue: PIQUETTE! 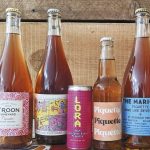 The effect of Covid19 on drinking habits is real: the vast expansion of Direct-to-Consumer wine shipments, subscriptions, and online vendors; younger drinkers opting for wine over beer and spirits; and more consumption of domestic vs. imported wines among others. And some new trends and discoveries have taken hold in the wine media—orange wine, new versions of wine-based seltzer-type drinks, more wine in single-serving cans and bag-in-box formats, rosé prosecco and winter rosé, pétillant natural wine, and of course virtual wine tastings (ho-hum).

One new trend gaining traction is Piquette. It’s not a fad, to be sure; the Romans were evidently making it two millennia ago and in other places such as Georgia, long before that. But it’s not really wine, at least in the way winemakers themselves and almost all of us who drink it imagine it to be.

Instead of crushing wine grapes and fermenting the juice, Piquette makes use of what’s left over in the winemaking process: using the discarded skins, stems, pulp, and seeds left behind from the crush, which is called pomace. In most cases, pomace is hauled away to landfills or composted, and that’s the end of it. Not here.

Making Piquette is essentially a simple process: adding water to the pomace, letting it absorb its color, flavor, and natural yeasts and sugars. The resulting liquid is drawn off, bottled, and typically closed with a soda bottle-type cap. Fermentation then takes place inside the bottle using the residual yeast and sugar, creating a low-alcohol-beverage (from say, as low as 4% abv) with a bit of effervescence, because the carbon dioxide is captured within the liquid rather than vented off during fermentation. Making it is not always a slam-dunk: sometimes unwanted bacteria can thrive in the low-alcohol liquid which can require some manipulation or additives by the maker, or just plain ruin the batch.

The recent renaissance of Piquette is often attributed, at least in part, to Todd Cavallo, the owner and winemaker of Wild Arc Farm in New York’s Hudson Valley. Other notable producers include The Austin Winery in Texas, Maryland’s Old Westminster, and of course Oregon, at its Troon Vineyard, which refers to it as a “frugal farmers fizz, and The Marigny, which calls it a “wine-like beverage.” And more trendy bars are serving it, in both large and medium-sized cities.

So how does it taste? Drinkers say tart, fizzy, and cider- or beer-like even, of course with some of the flavor profiles of the type of grape pomace used—Riesling, Cabernet Franc, Montepulciano, even Tannat— and some perhaps totally obscure grapes such as Portugeiser that Americans have never heard of, much less tasted.

It’s not super easy to find, and may not be your cup of tea, but when spring and summer finally roll around, hopefully with the majority of us fully vaccinated, it’s something worth looking for.